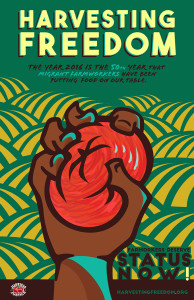 MWSN is proud to support Harvesting Freedom, a campaign from Justicia for Migrant Workers (J4MW). It includes a call on the Canadian government to finally allow migrant farm workers in Canada to access Permanent Immigration Status. From the campaign’s website:

The Campaign starts in January of the 50th year of the Seasonal Agricultural Workers program and will include a Pilgrimage from Leamington to Ottawa in time for Thanksgiving season on October 2nd and 3rd, 2016. The Pilgrimage will highlight the reliance on farm workers across its route as it crosses Southern Ontario and will culminate with a clear message to the Federal Government of Prime Minister Justin Trudeau: Justice is 50 years overdue.

The campaign was launched January 25, 2016 in Ottawa with a group of farmworkers hand-delivering Prime Minister Justin Trudeau a giant 50th Anniversary party invitation. The Prime Minister is hereby invited to RSVP and bring justice to the thousands of farmworkers who have put food on Canada’s tables for the last 50 years without any chance to lay roots in the country. Justicia for Migrant Workers and the Harvesting Freedom Campaign will be organizing a series of actions throughout the year to raise awareness and put pressure for the government of Canada to do what’s right.

They are calling for support via a petition and donations; we encourage you to check out their website and support this important campaign.